A short introduction to history of ancient Kerala 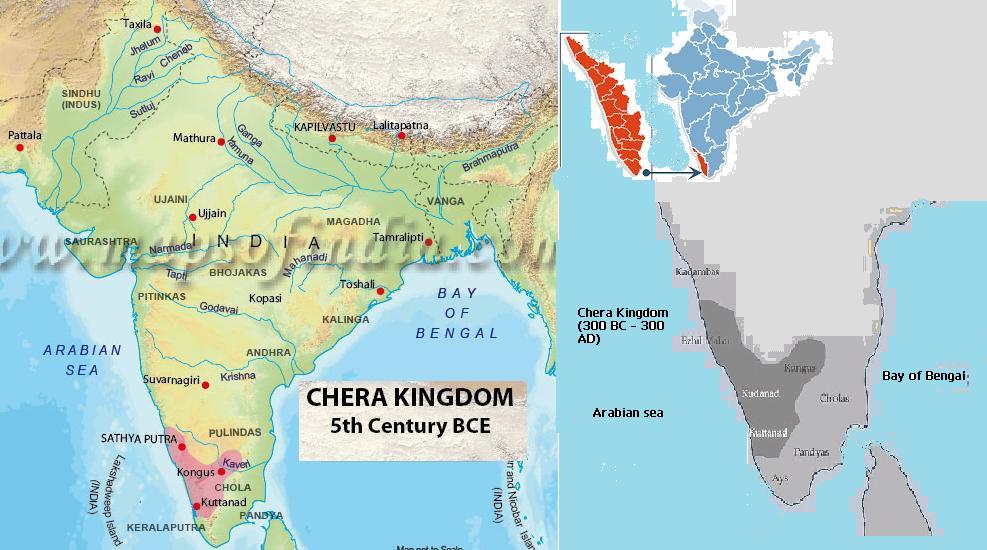 Kerala, a small state, belongs to the south west of India. Just like India is protected from the rest of Asia by the Himalayas, Kerala is separated from the rest of India by the Western Ghats. Just like Himalaya is not a total separation, there are passes (like the Khyber) that connect it to the outside world; the Western Ghats have passes, like the Palghat gap, that connects it to the eastern state of Tamil Nadu. Similarly the southern end also is like a big corridor. The western border is protected by the Arabian Sea.

This relative isolation gave Kerala a peculiar culture unique to its own. Kerala culture developed from Tamil Culture. At the beginning of history, both had the same language and rulers and culture, but the isolation, separated the culture and caused the development of a new language – Malayalam. It is this peculiar culture that made Kerala the foremost state in India with its standards comparable to the Western Europe. Even though the soil has low fertility and in consequence didn’t give rise to any dynasties and empires like the rest of India, it made a separate path of its own and made a mark.

The Megalithic in Kerala lasted still 3000 BC and the Neolithic lasted till 300BC. In 300 BC it gave rise to the Iron Age without any intervening Bronze Age. It is from that time true history of Kerala starts. Though we have a few documents to go on; most of the literature that we base our history was written down later like the “Sangam literature” which was written down only after 300AD, we do have some external references like Pliny’s and some travel documents of ancient Arabs and Romans, with the help of which we could pin down Kerala history.

What we first hear about Kerala is that its connection with the west, especially Romans and Arabs with its trade links. From that we were thinking that Kerala’s was a well developed society by the time of Christ. But new researches are finding it out that it was not the case.

At the beginning of history, that is, 300AD Kerala was a land of tribes. The prime mode of sustenance was hunting gathering. Tribes raided each other, and as this raiding atmosphere was not conducive to agriculture very few practiced it. But there was herding.

Even though there was trade with Rome, the trade was mostly a barter exchange with the chieftains. Though the Romans used gold coins, the Keralaities didn’t use it as money, but as an ornament just like the ancients used conch shells and other decorative ornaments. It was not a stratified organized society, but a loose federation of tribes.

The tribes were many, headed by chieftains. Plundering neighboring tribes, especially for cattle was their chief occupation and wealth is redistributed through feasts just like any other tribal society. The chief of the tribal chiefs were the Cheras. They were, interestingly not based in Kerala but Tamil Nadu, near the modern Trichy. The lack of agriculture and lack of fertility will explain why it had to be based in Tamil Nadu and not Kerala. They came to Kerala through the Palaghat gap, followed the Periyar river and made their headquarters in Kerala at Muziris (Muciri) the ancient port town through which they conducted trade with the Romans and others. The main exports were pepper, spices and condiments and ivory and pother forest products. The first and most prominent among their dynasty were Udiyan Cheralathan, Nedum Cheralathan and Cheran Senguttuvan.
There was another prominent chieftain that straddled the south, the Ays. They too were initially based in Tamil Nadu but later changed their capital to Kollam in Kerala. Ay Andiran, Athiyan and Thithiyan were the most prominent among them.
The society of that time was more or less equal. The people worshipped local gods like Kotaiva Devi (goddess). The important people were Panar, who were bards, Kuravar… Hinduism that originated in the North hadn’t penetrated Kerala then. There were Buddhists and Jain settlements in Kerala too. They were probably the only literate people in Kerala then.
Then came the Kalabhra interregnum about which we know very little about. Though the Kalabhras didn’t rule Kerala directly social changes occurred in Kerala at that time. After 300 AD when a new era inaugurated Hinduism was getting a hold in Kerala. Jainism and Buddhism were slowly waning. A new dynasty (somewhere around 800 AD) or the revival of the old Cheras occurred, which was established by Kuleshekhara Varman hence sometimes called Kuleshekhara dynasty or Cheras (later). The Ays that got eclipsed by the interregnum too had a revival under Karunandadakan and Vikrama Varagunan by around 900 AD.
The Caste system and the Bhakti movement also started around this time. Sanskrit also started getting a prominence and the Malayalam language started to evolve and became a language in its own right by 800 -1000 AD.
So after the interregnum and by 1000 AD Kerala society started to be a separate society from the Tamil. It became a land on its own right. Never was it ruled by a single king, there were many prominent chiefs like Zamorins in the North, Venad in the south, Kochi in the middle with many others. Probably owing to the lack of soil fertility the land couldn’t support huge armies, though it had its fair share of fights with Ays and Cheras fighting the Cholas and Pandyas of the Tamil country. It maintained its culture and separateness till it joined the Indian union, for it never came under the direct rule of the British except for the Northern Kerala which was conquered earlier by Tippu Sultan. Even as an Indian state it maintained its separateness by electing the first democratically elected communist government in the world and by going faster than any other states in the social parameters of development. And we celebrate Onam, wherever we are. That is the story of Onam and Kerala.